Breaking the evolution of a many-nucleon system into infinitesimal time steps may be the key to advancing computational nuclear physics.

The challenge of computational nuclear physics

Simulating the interaction of nucleons has long been a goal for computational (low energy) nuclear physicists. Despite extraordinary advances in high-performance computing, major conceptual breakthroughs in effective field theories (EFTs) of quantum chromodynamics, and the development of ever more efficient many-body methods, the comprehensive solution of the many-nucleon problem remains an outstanding challenge.

In particular, simulating the vast majority of dynamical processes—such as nuclear reactions—may only be possible with quantum computing. However, quantum simulations are currently limited by the accumulation of error, noise, and loss of coherence across multiple quantum logic operations.

We're working to change that by harnessing LLNL's unique software-reconfigurable multi-level quantum processors to implement a quantum-classical co-processing scheme for the simulation of many-nucleon dynamics in real time.

We'll start by considering a system of two neutrons at leading order of chiral EFT, where the nuclear interaction contains both the spatial-dependent tensor term of the nuclear force and the spin state-dependent contact force.

Our plan is to formally describe the simulation's evolution by breaking the propagation time into a number of small intervals (𝛿𝑡) in the spirit of Feynman's path integrals and to split the unitary time-evolution operator into a sequence of short-time propagators.

This approach to the simulation will allow us to write the Hamiltonian—the sum of kinetic and potential energy in a system—as the sum of spin-independent (SI) and spin-dependent (SD) components where each short-time propagator is divided into two independent evolution operators.

We will implement the real-time evolution of two interacting neutrons through quantum-classical co-processing by leveraging classical computing to propagate the spatial degrees of freedom and a quantum processor to evolve the spin degrees of freedom, with a SD Hamiltonian parametrically depending on the relative coordinate.

This work will not only deliver early successful demonstrations of the untapped utility of present-day quantum hardware in the simulation of nuclear systems, but it also has the potential to unlock real-time path integral simulations of nuclear scattering observables on near-term universal quantum computers. 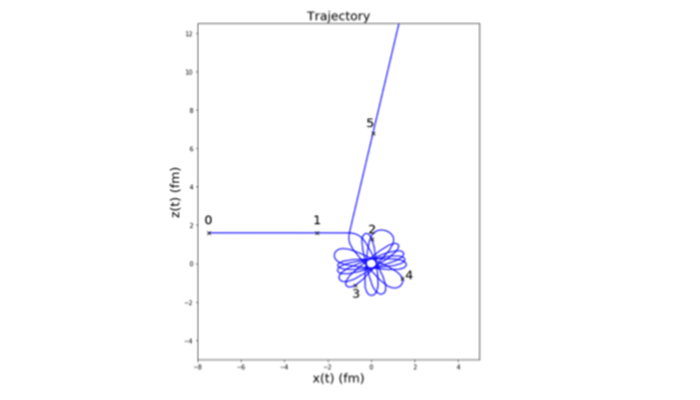 In a classical simulation of the real-time evolution of two interacting neutrons at leading order of chiral effective field theory, neutrons begin effectively infinitely far apart and in the |↑↑⟩ state. This image shows the trajectory of the relative distance between the two neutrons obtained by solving the classical equation of motion by direct integration. 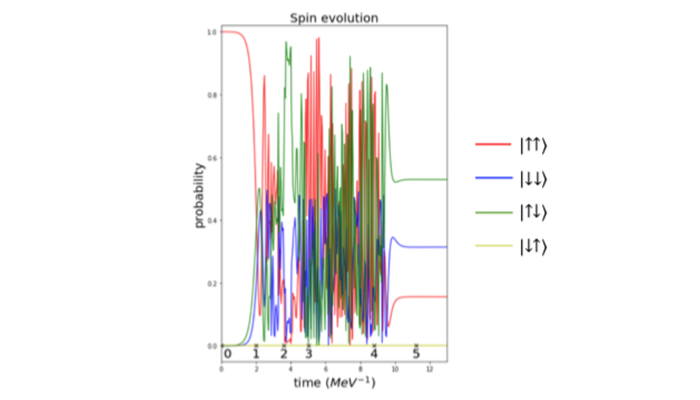 In a classical simulation, there is a corresponding evolution of the occupation probability of the spin states of the system in the chosen computational basis.