Bringing a Star to Earth with Quantum Algorithms

Our work begins with developing conceptual approaches to quantum algorithms that will be useful once error corrected quantum computers become widely available.

That may sound like putting the cart before the horse, but this work is the foundation for understanding how future quantum algorithms can provide game-changing capabilities for FES applications.

Furthermore, we will develop a set of FES-inspired model problems suitable for implementation on near-term quantum computing hardware that can address challenging topics such as the “continuum lowering problem,” an important unsolved many-body problem in the physics of plasmas.

To turn the theory of fusion power into reality requires an array of innovations, including algorithms designed to work on present-day quantum computing platforms that don't yet have active error correction functionality.

In many cases, researchers constrain their use of qubit systems to just two states: the system's ground state and its first excited state. That binary constraint literally puts the "b" in qubit.

However, our work extends to higher energy levels—mainly the second and third excited state. That effectively uses two coupled qubit systems to create a "qudit" system (where the d represents any state above two).

By testing our algorithms on multiple platforms, we can compare the LLNL approach for developing control pulses for arbitrary unitary gates on a multi-level qudit platform to other qubit-based approaches that provide standardized sets of quantum gates.

We can then compare the experimental results both to analytic theoretical and computational models of decoherence for each level of the qudit device based on the Lindblad Master Equation, Random Matrix Theory, and random perturbation theory.

Likewise, by collaborating across scientific fields including plasma physics, high-energy-density physics, quantum simulation, and quantum computing, our team will lead the way in collaboration and innovation and have a transformative impact on FES's mission. 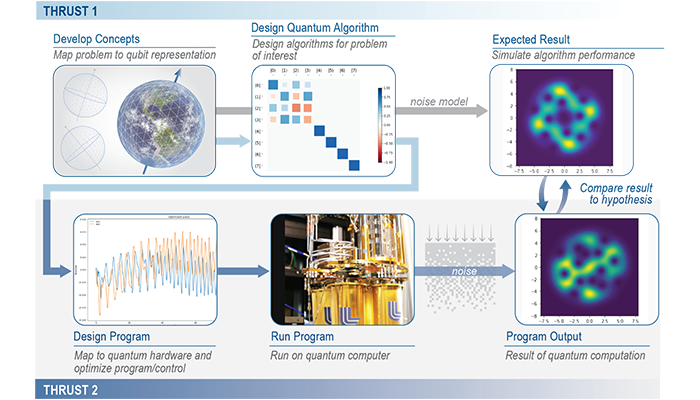 The theoretical hypotheses and predictions developed within Thrust 1 will be compared to the “experimental” quantum computations obtained within Thrust 2. Scientific methods will be used to improve the performance of the algorithms and the fidelity of the results to the expected outcomes.

The LLNL Quantum Design and Integration Testbed (QuDIT) hardware platform has the ability to represent the action of multiple quantum gates with a single optimized microwave control pulse.