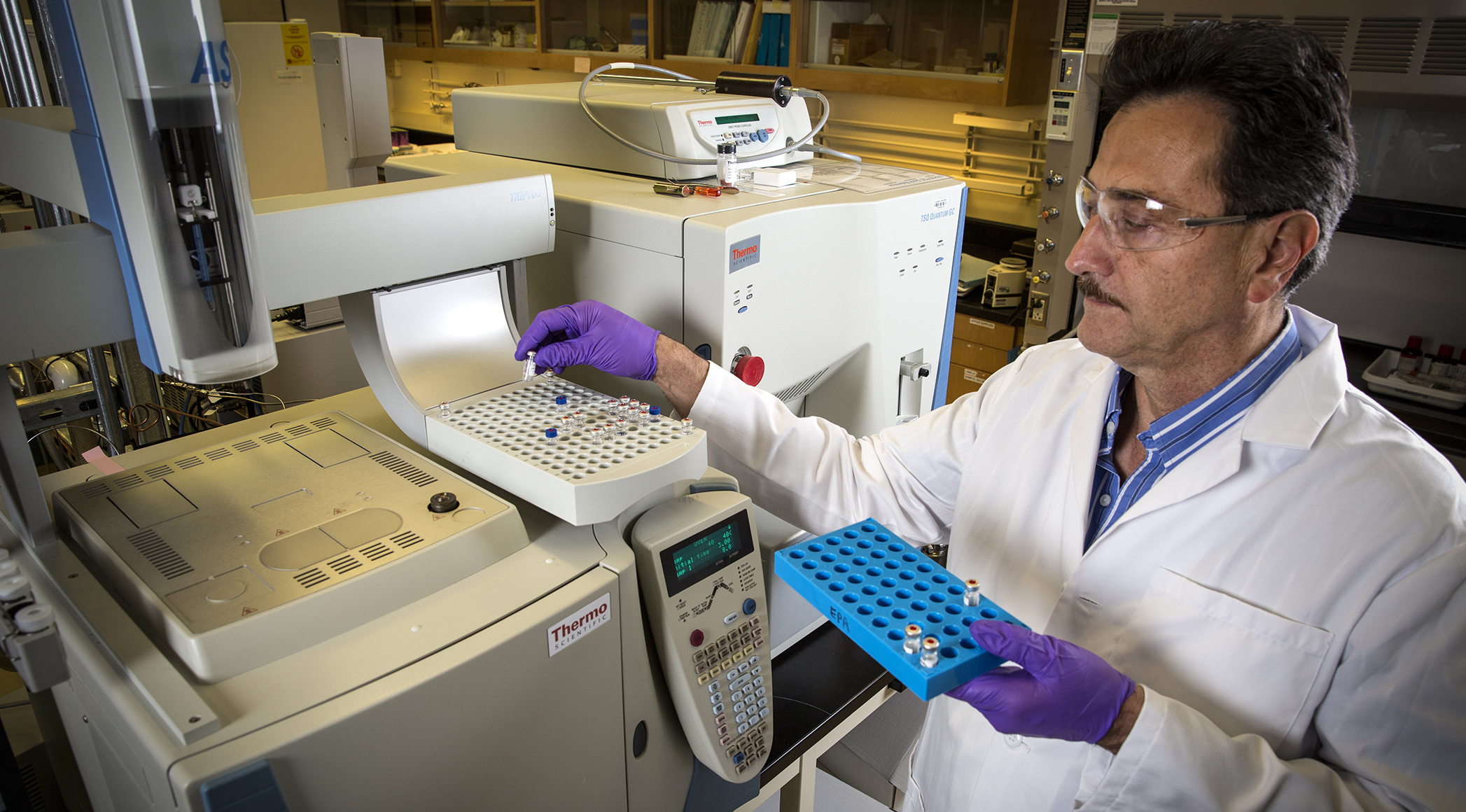 Despite a worldwide ban, chemical weapons pose a legitimate threat to global security. In 2013, rockets deployed the nerve agent sarin over a populated area of Syria, killing hundreds of people and hospitalizing thousands more. In accordance with the Chemical Weapons Convention (CWC) Treaty, the Organisation for the Prohibition of Chemical Weapons (OPCW) leads international inspections and investigations of suspected chemical weapon production facilities. The OPCW relies on a network of carefully selected laboratories to analyze chemical weapon samples.

Since first achieving accreditation in 2003, Lawrence Livermore’s Forensic Science Center (FSC) is one of just two U.S. laboratories accredited by the OPCW. Under the direction of program leader Brad Hart and principal investigator Armando Alcaraz, the FSC has earned its seventh consecutive “A” grade from the OPCW. “OPCW certification is in many ways foundational to much of the analytical work done at the FSC,” explains Hart. “This is true for both research programs and real-world forensic analysis programs.” The FSC’s analysis methodologies for detecting chemical warfare agent (CWA) exposures and development of environmental, safety, and health protocols for handling and synthesizing CWAs have made it a valuable resource in global efforts to eradicate chemical weapons.

To maintain accreditation, the FSC is expected to achieve high scores on OPCW’s annual proficiency test, averaging two “A” grades and one “B” grade, or better, over a rolling three-year period. The process requires completion of tests to identify the contents of samples containing chemical compounds. The FSC must be able to detect minute amounts of CWAs, precursor compounds, and their decomposition products. Hart notes, “These rigorous requirements and the small number of labs that maintain that certification worldwide—around 20 or so—put us in a rare category of analytical laboratory that speaks to the capability of our amazing staff.” The tests become more difficult each year, which motivates the team to continually expand the FSC’s capabilities. “There’s a lot of stress involved in OPCW testing, but we enjoy it,” says Alcaraz. “We like finding that needle in a haystack.”

As an OPCW-designated laboratory, Livermore is certified in both environmental and biomedical analysis. The October 2016 proficiency test focused on environmental samples, such as contaminated soil or organic liquid. These samples come from real-world scenarios, such as if a village population reported symptoms of nerve agent poisoning after an explosion or if a chemical agent was masked or concealed in a highly concentrated chemical interference.

In the first phase of the proficiency test, the OPCW provides samples without any context. The samples could contain various CWC-scheduled compounds—such as sulfur mustards or hydrogen cyanide—and their related degradation, decontamination, and reaction products. In only 15 days, the FSC must identify the compounds in each sample, working through every possibility to validate the detected substances against known chemical reference standards. If any compound is not commercially available or included in the OPCW databases, the FSC synthesizes it in-house. Alcaraz explains, “Making an authentic reference material and analyzing it with our instruments helps us know whether we’re identifying the test compound correctly.” Another critical component of the analysis is the presence of interfering compounds, such as pesticides, which the OPCW may include as red herrings. In the 2016 test, FSC staff correctly identified all required “spiking” chemicals as well as another chemical, benzylic acid, in a metal fragment.

The second testing phase focuses on accurate documentation of the chemical analysis. The FSC’s report must demonstrate that all personnel followed the appropriate processes to preserve testing integrity, including chain-of-custody protocols. “The report is as critical as the analysis,” notes Alcaraz. Only when both phases have been completed successfully will the OPCW award a top grade. As the final step of the 2016 testing period, Alcaraz, along with FSC scientists Carolyn Koester and Brian Mayer, visited the OPCW’s headquarters in The Hague, Netherlands, to review the test results and learn more about the origin and preparation of the samples.

The annual OPCW test creates a high-energy atmosphere at the FSC. In the days leading up to receipt of the samples, the team prepares workspaces and tests the equipment. “The adrenaline level starts off low,” says Alcaraz. “Depending on whether the instruments are behaving themselves, it starts to go up.” Among the primary instruments used are gas and liquid chromatograph/mass spectrometers, which can detect quantities of compounds weighing a billionth of a gram or less. In addition, nuclear magnetic resonance spectroscopy helps tease out unknown chemicals in spiked samples. Alcaraz, who has coordinated many annual tests, emphasizes the importance of teamwork and preparation. “Before we receive the samples, we plan our approach to analysis. That process evolves day by day as the test unfolds.”

The FSC operates as part of Livermore’s Global Security and Physical and Life Sciences directorates. Its nearly two dozen scientists are experts in analytical chemistry, organic and inorganic chemistry, nuclear chemistry, toxicology, pharmacology, and forensic instrument design and fabrication. The FSC also holds international ISO-17025 laboratory accreditations from the American Association for Laboratory Accreditation for chemical warfare agent, nuclear forensic, and explosives chemical analyses and is an Environmental Protection Agency Reference Laboratory. As proven with consistently high grades from OPCW, Lawrence Livermore is equipped to provide an effective forensic response to terrorist use of CWAs at home or abroad. According to Hart, FSC staff are always up to the task: “Maintaining OPCW certification is especially challenging. The annual tests are among the most difficult chemical analysis proficiency tests and challenge some of the world’s best analytical laboratories. That we have completed seven consecutive tests, receiving an ‘A’ grade for each, is directly attributable to the experience, skill, and dedication of the staff who work in the Center every day.”