High energy density (HED) science includes the study of condensed matter at densities common to the deep interiors of Giant planets, and hot plasmas typical of stellar interiors. This multidisciplinary field provides a foundation for understanding a wide variety of astrophysical observations and understanding and ultimately controlling the fusion regime. Specifically, thermonuclear ignition by inertial confinement in the laboratory – as well as the transition from planets to brown dwarfs and stars in nature – takes place via the HED regime. A wide variety of new and emerging experimental capabilities (National Ignition Facility (NIF) , Jupiter Laser Facility (JLF) , etc.) together with the push towards Exascale Computing help make this new scientific frontier rich with discovery. 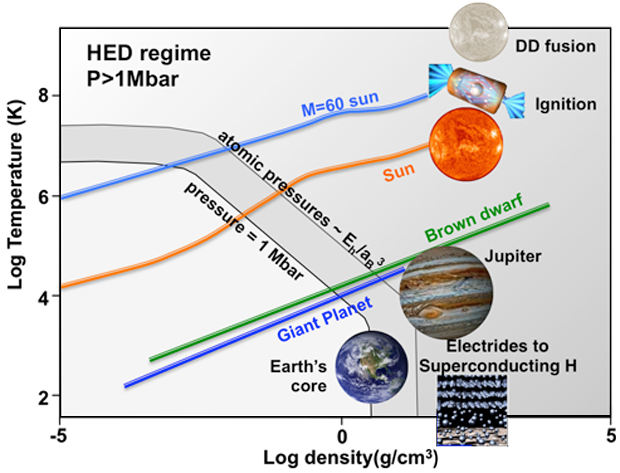 The HED domain is defined were the energy density (units of pressure) is above 1 Mbar. This is comparable to the energy density of a chemical bond such as in a water molecule. Thus at 1 Mbar, chemistry as we know it changes. Experiments at NIF now routinely probe matter at 100 Mbar. At these "atomic pressure" conditions the energy density is comparable to that of the inner core electrons, so the atoms themselves change. The dense HED regime includes highly degenerate matter, with interatomic spacing less than the de Broglie wavelength. This is similar to quantum regime achieved at low temperatures (e.g. Bose-Einstein condensation), however, unlike the low temperature analog, this HED regime simultaneously probes interatomic separations less than the Bohr radius. This opens an entirely new quantum mechanical domain, where core electrons - not just valence electrons - determine material properties and gives rise to core-electron-chemistry and a new structural complexity in solids. Potential exotic electronic, mechanical, and structural behavior of such matter include room temperature superconductivity, high-density electrides, first order fluid-fluid transitions, and new insulator-metal transitions. Such matter is likely quite common throughout the universe, existing in the more than 1000 recently discovered Exoplanets. Recreating and understanding these HED conditions in the laboratory will yield key constraints for planet evolution models and potentially a new understanding on how to design materials with specific properties.

HED conditions at higher temperatures are important to the birth and death of stars and controlling thermonuclear fusion in the laboratory. Take as an example the birth and cooling of a neutron star. The central part of a star, ~8-20 times the mass of our sun, fuses its way to iron and cannot go further since iron has the highest binding energy per nucleon of any element. As the iron core accumulates to ~1.4 solar masses, electron degeneracy pressure gives up against gravity and collapses. Initially the star cools by the rapid emission of neutrinos. The outer Fe surface layer (~109 K) gives rise to spontaneous pair production then reaches a temperature where the radiation pressure is comparable to the thermal pressure and where thermal pressure is comparable to coulomb interactions. We can now test fundamental states and processes in stellar evolution with laboratory HED experiments.

Finally in the low density but hot HED regime, where fluctuations and resulting dissipative effects are expected to be the great destroyer of coherent phenomena, recent discoveries show this is not always the case. Both observations of supernova remnants and recent colliding shock experiments show that self induced fields in collisionless shocks can give rise to a rich variety of unpredicted coherent behavior.

In the past several hundred years, observational astronomy has allowed us to construct a picture for how the universe works. Today, recent (NIF) and emerging HED facilities enable us to recreate the cores of planets and stars in the laboratory. Moreover, computational capabilities allow us to interpret experiments at a more fundamental level and simulate the evolution of astrophysical phenomena from basic principals. Together, these new HED capabilities create a microphysics observatory for astrophysical phenomenon, the ability to explore materials in a new quantum regime, and the ability to manipulate matter and energy towards controlled thermonuclear fusion.

We will use experimental and computational approaches to continue this research and focus on: