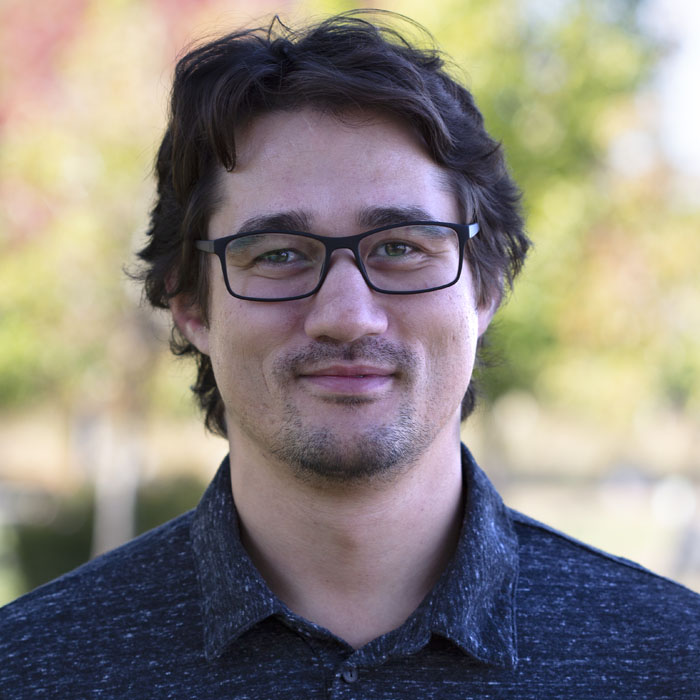 Viacheslav joined the Rare Event Detection Group at LLNL in October 2018 as a postdoctoral researcher, with the goals of pushing the existing technological boundaries in neutrino detection and unveiling the mysteries of the neutrino.

Prior to that, he was a graduate student at the University at Hawaii, working with John Learned on the miniTimeCube experiment, building and testing the detector. The miniTimeCube was the first boron-loaded plastic-stcintillator detector utilizing fast-timing electronics mounted directly on the multi-anode micro-channel-plate photomultiplier tubes with an unprecedented photocoverage and spacial resolution (1536 individual pixels/channels looking at a 2-liter volume). The detector was deployed at the research nuclear reactor at NIST to look for antineutrinos emitted from the reactor.

Viacheslav’s primary project is to build a novel neutron/neutrino segmented Li6-doped PSD plastic-scintillator detector, an LDRD project led by Steven Dazeley. The current version of the detector is an array of 64 plastic-scintillator rods optically coupled to two 64-pixel arrays of silicon photomultipliers. The long term aim is to build a full scale detector and deploy it as a near-field detector of antineutrinos at a reactor, such as the HFIR reactor at Oakridge NL, or as part of the Advanced Instrumentation Testbed (AIT) at Hartlepool (UK), a research initiative led by LLNL and sponsored by the Department of Energy’s National Nuclear Security Administration (DOE NNSA).

His other research project is WATCHMAN — the WATer CHerenkov Monitor for Anti-Neutrinos. The detector is 19m-diameter 20m-height cylindrical tank filled with ultrapure water doped with gadolinium, located at Boulby mine, 1 km underground and 25 km away from the Hartlepool reactor in the UK. The WATCHMAN detector will be the first project to continuously monitor nuclear reactors at large distance and one of a few projects around the world to utilize a novel technology of doping water with gadolinium, thus allowing the tagging of neutrons from the reactor antineutrino inverse beta-decay reaction. Currently, WATCHMAN is the flagship detector of the AIT program and is the first detector to be built as part of the UK–US nuclear non-proliferation consortium.