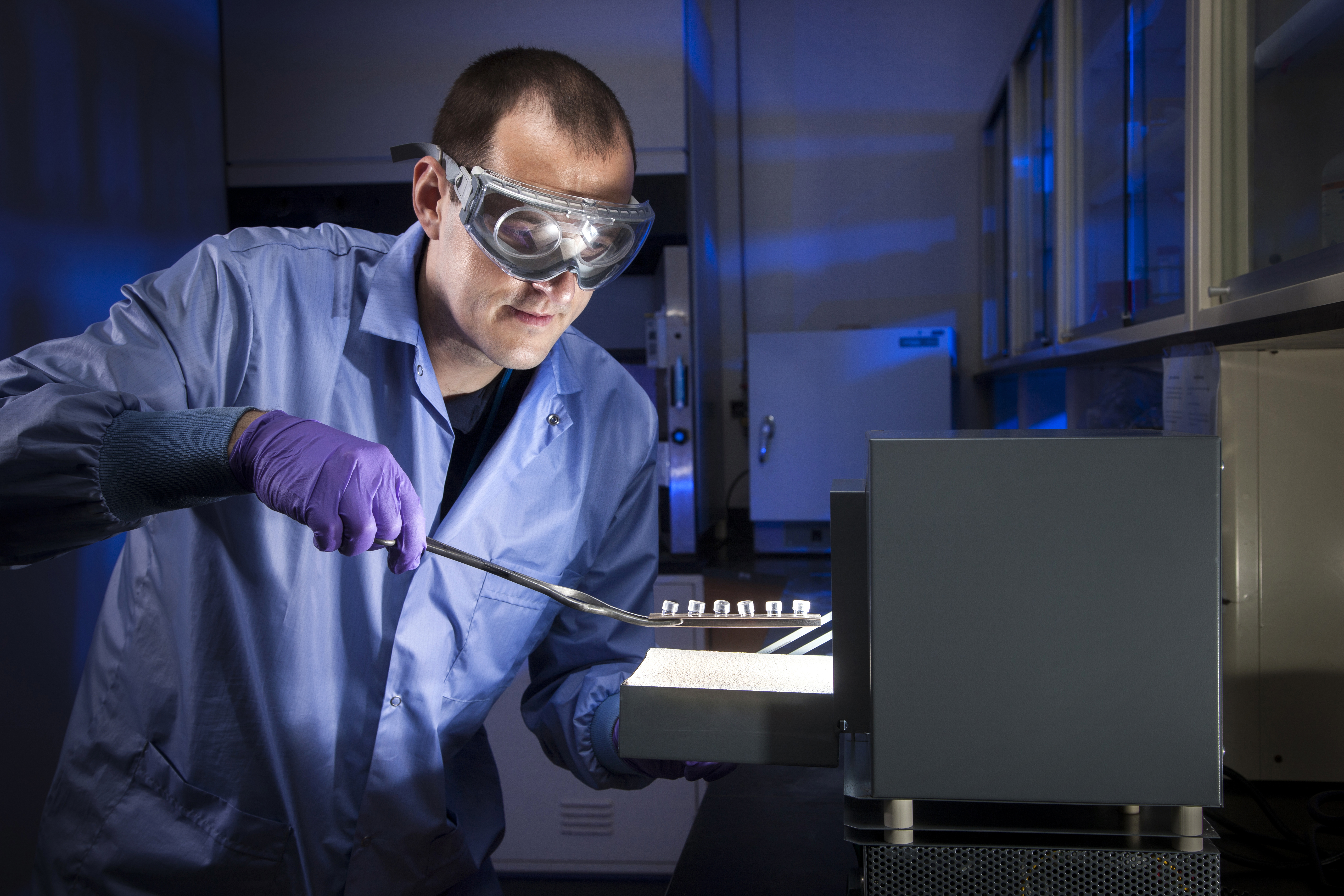 An extensive sample preparation process precedes analysis with accelerator mass spectrometry (AMS). CAMS scientist Alan Hidy places samples in the hydroxide form into a muffle furnace, where they will convert to the oxide form at 850 degrees Celsius. (Photo by Randy Wong.)

The bookcase in Alan Hidy’s office is loaded with carefully labeled bags of rocks—some the size of a fist, others pulverized into dust. The granite in these bags is destined for isotope ratio measurement at Lawrence Livermore’s Center for Accelerator Mass Spectrometry (CAMS). “These are from the Sierras,” says Hidy, referring to his ongoing study of glaciation high in the mountains that stretch along California’s eastern border.

Hidy arrived at the Laboratory in 2014 as a postdoctoral researcher, then converted to staff scientist for the Atmospheric, Earth, and Energy Division in November 2017. At CAMS, he explores landscape evolution, sedimentology, geochronology, and other aspects of Earth science relevant to Livermore’s national security mission.

Growing up in southern Utah, Hidy was surrounded by the Colorado Plateau, a desert region extending through four southwestern states. His interest in geology was born in this area he describes as “a National Park wonderland.” He studied geology at the College of Eastern Utah and Utah State University before relocating to Nova Scotia, Canada, for a Ph.D. in Earth Sciences at Dalhousie University.

Field experience opened the world for Hidy in a way the classroom could not, and he focused his doctoral research on the application of terrestrial cosmogenic nuclides (TCNs) to Earth system processes. TCNs are rare isotopes created in materials at or near the Earth’s surface. They accumulate with exposure to secondary particles produced when high-energy cosmic rays collide with atmospheric particles. Some TCNs, such as beryllium-10 and aluminum-26, are radioactive. Scientists use accelerator mass spectrometry (AMS) to measure traces of these isotopes in rock, soil, and sediment to determine exposure or burial ages and rates of surface processes. Such data inform studies of glacial advance and retreat, tectonic activity, landform history, climate change, and other Earth system processes. “Cosmic particle intensity decreases through mass of rock, so I’m analyzing the time passed since the material was near the surface,” explains Hidy.

Hidy’s first postdoctoral appointment took him to Jerusalem, Israel, where he investigated earthquakes in a fault system known as the Dead Sea Rift. Other work in Israel included modeling alternating cycles of aggradation (due to sediment deposits) and incision (due to erosion from water drainage) in the Negev Desert. Hidy has also conducted geochronology research in the Kalahari Basin in southern Africa and the Cordilleran Ice Sheet in northwestern Canada. His research in the Sierra Nevada mountains shows marked deglaciation corresponding to the onset of the Industrial Revolution, furthering the evidence for anthropogenic climate change.

With Hammer and Chisel

Hidy has quarried tons of rock looking for cosmogenic nuclides in quartz extracted from granite. It takes about 20 grams of pure quartz to yield a single isotopic sample. The collection process begins with a hypothesis—the amount of an isotope likely to be present, given the area’s geomorphology. Using a hand lens, he estimates the percentage of quartz contained in the granite. Then he calculates how much granite will produce enough quartz for a sample, factoring in loss from cleaning, crushing, sieving, and other processing steps. The resulting quartz grains must be big enough to survive the acid treatment involved in sample preparation. Hidy states, “The exact amount varies from site to site. I end up needing around 1 to 2 kilograms of rock per sample.”

Wherever he was in the field, Hidy often relied on local laboratories to break down geologic specimens into test-ready samples. “I collaborated with people in multiple locations who could find labs that do the prep work,” he notes. “Otherwise, it becomes cumbersome to transport the rocks yourself.” Even with assistance from satellite laboratories, Hidy has carried rocks and sediments on airplanes and shipped specimens across oceans.

Over the years, Livermore sometimes became the final stop for Hidy’s samples. “Before I met anyone from the Laboratory in person, I’d been sending samples for testing. CAMS researchers would run the samples and send the data back,” he says. Hidy met paleoclimatologist Susan Zimmerman at a Geological Society of America conference, and she invited him to visit Livermore and meet the CAMS team.

After seeing the AMS process up close, Hidy applied for a job. Now he runs his own samples. “I’m involved in all phases of beryllium operations at CAMS. I like being able to pick up a rock and take it all the way through the process until there’s a measurement and an age,” he states.

Hidy’s latest interest is a phenomenon known as precariously balanced rocks (PBRs). These formations occur when soil erosion leaves boulders perched atop other rocks or when glacial movement deposits rocks onto others. PBRs can provide an indication of landscape stability, particularly in seismically active areas. Hidy explains, “These rocks are seismometers. If they haven’t fallen over, they must have survived earthquakes of a certain magnitude.” Measurement of the time since the boulder became balanced gives its fragility date, which, when combined with a computer model of the ground motion required to topple the boulder, can be used to test earthquake models for that location. Hidy expresses this objective in practical terms: “If I’m buying a house near an active fault line, I want to know how accurate the seismic hazard model is.”

Transporting chunks of granite is not the most difficult aspect of Hidy’s career. The multidisciplinary demands of owning his research from start to finish challenge him in new ways. “I was trained as a field geologist, and now I’m using physics and chemistry because of AMS,” he says. “I’m constantly learning new disciplines to make my discipline more useful.”

Thanks to collaborative staff, CAMS provides an encouraging environment for Hidy. He appreciates the range of expertise available from all areas of the Laboratory, citing as one example the beryllium-7 separation method established by scientists Scott Tumey and Narek Gharibyan. Hidy states, “I work at one of the best AMS facilities in the world, and I get to count atoms on a computer. How cool is that?”