When materials undergo phase change (solid → liquid, solid → solid, liquid → solid), it takes time for the atoms in one phase to rearrange themselves to form the other phase. An example is melting from a crystalline solid, where thermally-induced motion of atoms increases until they cease to vibrate about fixed positions and start to flow. Here, the time for this to happen can be quite rapid, since the final state is disordered and there are many microscopic instantiations of such a disordered liquid state in which the system can ultimately reside. In contrast, when the phase transition involves a disordered state turning into an ordered state, as in the process of freezing (liquid → solid), the time for rearrangement can be much longer. This is because the material must first undergo just the right type of fluctuations which produce patches of frozen atoms which then grow until the whole material has solidified. Typically, in such a nucleation and growth scenario, multiple seeds or nuclei grow simultaneously, resulting in a solid material which consists of a bunch of misaligned crystalline grains, the sizes of which are determined by the rates of both nucleation and growth.

This picture of phase change is an old one, treated very successfully by classical nucleation theory (CNT). Things become quite a bit more complicated, however, when the transition is solid → solid, for here the growing nuclei are generally far from spherical and the effects of crystal plasticity are important. And even for the freezing transition, the situation is altered yet again when such a transition is driven by dynamic compression (as in, sending a strong a pressure wave into a material). Here, the short time-scale of the pressure pulse --- which occurs on the order of a few microseconds or even faster --- can compete with the natural time-scale for atomic rearrangement to overdrive a material well past the point where it would have been predicted to solidify in equilibrium. It is also then possible for this over-pressurized liquid to solidify very rapidly at this higher pressure, when the liquid phase is so dense as to be fundamentally unstable.

These time-dependent phase change phenomena are ignored in typical continuum simulations of materials response which use equation of state (EOS) tables and strength models, etc., as input. In such standard approaches, phase transformations are assumed to be instantaneous in time. However, like in the generation of constitutive models for EOS and strength, it is possible to use microscopic, atomistic simulations together with the results of focused experiments to build physics-based phase transformation kinetics models which then inform these macro-scale continuum simulations. This is the purpose of the LLNL Phase Transition Kinetics effort.

Our program proceeds along two fronts: (a.) Continued development of SAMSA, a phase transition kinetics code which allows for the detailed modeling of time-dependent transitions between any number of distinct phases of a material. This code is coupled to 3D hydrodynamics simulation codes maintained by LLNL’s ASC multi-physics code effort. The models supported in SAMSA include variants of CNT, as well as phase-field approaches, and simpler few-parameter rate laws. (b.) The development of Non-Equilibrium Molecular Dynamics (NEMD) approaches from which the detailed microscopic kinetics model parameters can be determined from simulations. One of the most important of these model parameters, for the case of the liquid → solid transition, is the liquid-solid interfacial free energy, or surface tension, which results in an energy barrier that must be overcome if a small patch of liquid is to transform into a patch of solid. By utilizing both microscopic NEMD and macro-scale continuum approaches, we work towards a ground-up predictive tool for simulating the true time-dependent response of materials undergoing phase changes in dynamic compression experiments.

Subjects focused on thus far have included the modeling of solid-solid phase changes in shocked iron (paper 6 below), solidification in dynamically compressed H2O (papers 1, 3, and 5), rapid solidification in a model metallic system (Mishin Cu; papers 2 and 4), and Ga as subjected to shock and ramp-wave compression. 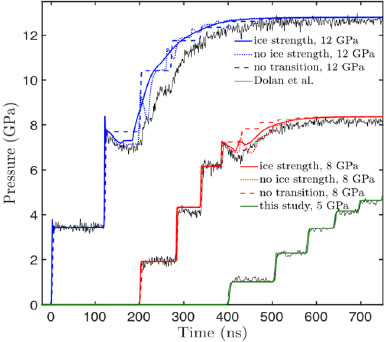 An MD simulation of the solidification of a model metallic system (Mishin-Cu) at ambient pressure. Here, the initial state is an undercooled liquid. Though the entire space is filled with atoms, only those which find themselves in locally solid-like arrangements are colored (key: blue indicates BCC, green indicates FCC, and red indicates HCP). MD simulation by L.A. Zepeda-Ruiz.