Multiphase Equation of State and Melt 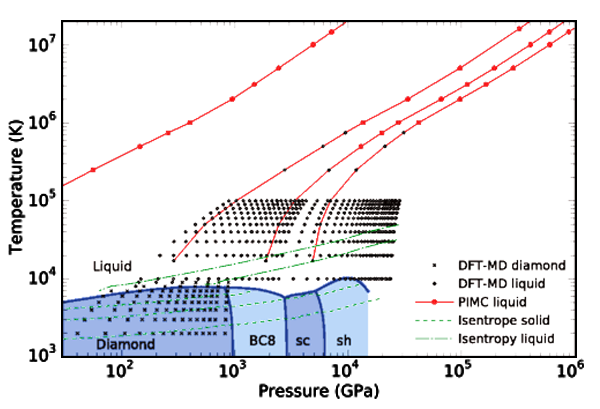 
All materials undergo phase changes when subjected to extreme conditions of pressure and/or temperature. For instance, solids transform to liquids and then to gases when heated. Also, materials generally exist in many different solid phases, subject to particular conditions of temperature and pressure. The physics governing which phase is stable at a given set of conditions is embodied in two concepts: energy (E), and entropy (S). At low T, the most stable phase is the one with the lowest internal energy. As T increases, entropy (measuring the number of microstates accessible to the system) becomes more important and works to stabilize systems with a large number of low-energy excitations. The quantity best suited to describe the interplay of energy and entropy is the Helmholtz free energy, A(V,T) (where V is the volume/atom) = E(V,T) - T*S(V,T). At fixed V, the thermodynamically stable phase is the one with the lowest value of A. In most experiments, it is pressure, P, which is fixed rather than V. In this case, one compares Gibbs free energies: G= A + P*V to assess relative thermodynamic stability.

If Helmholtz or Gibbs free energies are known for each phase of a given material, then comparisons between phases allow for the prediction of phase lines, i.e.- curves in thermodynamic state space (V,T,P) that bound regions of stability for phases. A melt line is such a curve. In addition, knowledge of the phase-dependent free energy suffices to predict all possible thermodynamic functions (in equilibrium), e.g.- specific heat, thermal expansion parameter, bulk modulus, sound speed, etc., for the general N-phase system. A simple example of this is the equation of state (EOS) itself: P= P(V,T).

At LLNL, there are a variety of applications where EOS is needed. Most of these applications involve computationally intensive hydrodynamic simulations of materials being subjected to extreme conditions (such as shocks). Tables of EOS are then needed which usually consist of E(V,T) and P(V,T) for wide ranges of V and T. For a very accurate description of the material, its true multiphase character must be respected, so that the EOS has to depend on the phase in an appropriate way, and transitions between phases must be included in a thermodynamically consistent manner.

We use simple approximations to represent the free energy of each phase of a material as a function of V and T. The most basic of these approximations is to assume that the free energy can be written as the sum of cold (T-independent), ion-thermal, and electron-thermal pieces. The cold piece is a result of the ground state electronic structure (chemical bond energies + ion interaction energies), and can be calculated for most materials very accurately with modern ab initio electronic structure methods (such as the LDA). The ion-thermal term is a result of lattice vibrations (phonons) and can also be computed with ab initio total energy methods. However, it often suffices to invoke a simple model such as an Einstein oscillator or Debye model to represent the thermal excitation of a whole spectrum of phonons, together with a term to account for anharmonicity (whereby the energy of excitation is not merely a quadratic function of atomic displacement). The electron-thermal term can typically be modeled by performing a low-T expansion of the free energy due to electronic excitations within a Fermi liquid paradigm. Again, ab initio methods can be used to compute an electronic density of states to then be used in this low-T expansion. Approaches such as these allow us to compute the entropy very simply, thereby circumventing the problem of simulating the system in a time-dependent (such as with MD) or stochastic way long enough to obtain the required statistics.

Of course, ab initio electronic structure methods are very computationally intensive, and cannot be used to generate tables of EOS that contain enough points (on a grid of V and T) to be used in hydrodynamic applications. More importantly, they are seldom accurate enough to replace experiments. For instance, LDA predicts the equilibrium density of crystalline phases to within a few percent, but the experimental measurements are far more certain than that for most materials. Simple models are then used to represent cold, ion-thermal, and electron-thermal pieces of the free energy that make use of a combination of experimental results (typically static and dynamic high-P experiments) and theoretical predictions of various types. Together with the proper thermodynamic constructions, these models then produce tables of EOS (and any other thermodynamic functions of interest) that are thermodynamically consistent and that respect both experimental data and theoretical work in a unified way.

To date, we have used this combined theoretical-experimental-phenomenological approach to compute phase diagrams and multiphase EOS tables for actinides, as well as for carbon (for use in the design of inertial confinement fusion capsules for NIF). We are currently investigating other materials such as Be (also for potential use in fusion capsule applications). The utility of our approach lies in its simplicity, together with its flexibility: Only a handful of parameters (such as bulk modulus in ambient conditions, Debye temperature, Gruneisen parameter, etc.) are required to characterize the free energy of each phase, and these parameters can be changed as new information (be it from experimental or theoretical studies) becomes available. Thus, we have a flexible yet accurate approach for producing multi-phase EOS tables for use in a variety of contexts.