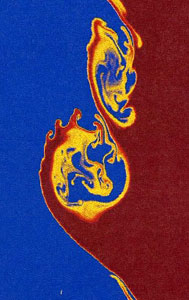 Interatomic potentials form the basis for all classical molecular dynamics (MD) simulations. They determine the forces that the atoms experience in a simulation, and it is through them that material properties are specified. Potentials give the energy as functions of the spatial coordinates of the ions, with the electronic degrees of freedom integrated out. In this project we develop many-body potentials for high pressure applications based on ab initio calculations of the properties of atomic systems. We are interested in both high fidelity and high speed potentials for use in highly scalable parallel MD codes. Indeed, we rely on the extraordinary computational power of the LLNL supercomputers in order to reach systems with billions of atoms [1] and systems that demand very complicated, expensive potentials [2]. We also rely on the supercomputer resources to carry out extensive ab initio calculations for parameterization and verification of the potentials [3]. The flagship potentials for high pressure simulations are the Model Generalized Pseudopotential Theory (MGPT) potentials invented by John Moriarty [4]. Our potential development efforts are, at least initially, concentrating on potentials for strength and phase transformation applications in metals.