The Cimarron project is a multi-institution collaboration dedicated to the prediction and measurement of properties of dense, highly collisional, and strongly-coupled plasmas. The main workhorse of the project is the ddcmd code, a domain-decomposition massively parallel classical molecular dynamics code capable of handling long-range forces such as Coulomb interactions. Phenomena studied are those associated with fusion and thermonuclear burn: electron-ion temperature equilibration, alpha-particle stopping power, electrical and thermal conductivities, etc. These phenomena have been traditionally studied with theoretical approaches such as classical and quantum kinetic theory, and computational approaches such as particle-in-cell (PIC) simulations and traditional radiation hydrodynamics codes. What ddcmd provides is a particle-based approach in which various Coulomb scattering cross-sections are computed in the course of the simulation, rather than input (as in PIC and rad-hydro methods). The cost of this, besides increased computational rigor, is the need to use statistical potentials rather then pure-Coulomb, to

Current areas of active research include: The study of the efficacy of various forms of statistical potentials in mimicking the quantum/pure-Coulomb answers at weak coupling (where various time-dependent properties are sufficiently well-known), the treatment of time-evolving bound states in H or DT plasmas with high-Z dopants, matter-radiation coupling at extreme conditions, and advanced multi-step integration methods to handle disparate time-scales in the MD simulations. See Ref. 4 below for an overview of the entire scope of the Cimarron project. 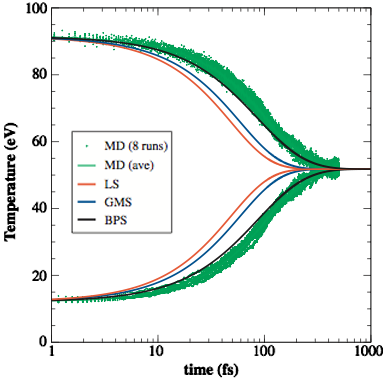 A simulation of electron-ion temperature equilibration in hydrogen. (See Ref. 8 below.)