The tight binding (TB) method is closely related to the linear combination of atomic orbitals (LCAO) method. Both methods employ a minimal basis composed of localized atomic-like orbitals, in contrast to the completely delocalized electronic states used in the free-electron model. The TB method is particularly well suited to describing the electronic states of non-metallic systems, including covalently bonded materials. Unlike LCAO and first-principles methods, TB methods do not involve the direct computation of overlap and Hamiltonian matrix elements from explicit wave functions. In TB methods these matrix elements are typically obtained empirically from fits to more accurate calculations or to experiment, but they can also be derived from first-principles expressions. The TB method is generally less accurate and less transferable than methods based on density functional theory (DFT), but it does provide a good alternative for simulating systems of larger size and over longer time scales than are currently tractable using first-principles methods.

There are many different TB variants, ranging from completely semi-empirical to first-principles-based[1], two-center to multi-center, orthogonal to non-orthogonal, and self-consistent to non-self-consistent. The self-consistent charge density-functional tight binding (DFTB) method is one example. It incorporates a self-consistent charge mode into the two-center non-orthogonal tight binding theory based on a second-order expansion of the Kohn-Sham total-energy functional as calculated within DFT. This charge dependent energy contribution improves chemical transferability significantly, resulting in improved values of reaction energies for many organic molecules and bio-molecules containing H, C, O, and N. Currently we are using the DFTB/MD method to investigate the kinetics of energetic materials at extreme conditions. 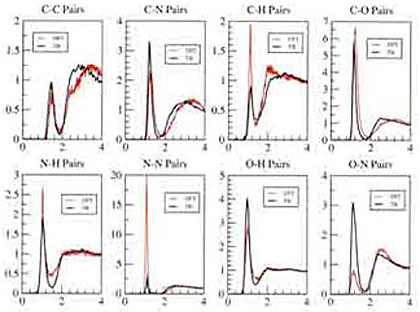 Radial distribution functions g(r) obtained from MD simulations of energetic reactions for a solid high explosive, PETN (C5H8N4O12), at a thermodynamic condition approximating the Chapman-Jouguet detonation state (density = 2.38g/cc and T = 4200K). The black curves were obtained from the self-consistent charge density-functional tight binding (DFTB) method, while the red curves were obtained from first-principles density functional theory (DFT). Both simulation cells contained 116 atoms and were carried out using an NVT ensemble. The resemblance of the DFTB/MD g(r) to those of DFT/MD demonstrates a good transferability of the DFTB method in describing chemical bonding at high pressures and temperatures.