Over the course of the past two decades, density functional theory (DFT) has proven to be an accurate and reliable basis for the understanding and prediction of a wide range of materials properties from the first principles of quantum mechanics (ab initio), without any experimental input. The linearized augmented planewave (LAPW) method [1] is a method for solving the equations of DFT. Modern implementations allow for a number of approximations to exchange and correlation (LDA, GGA, and LDA+U, among others) and make no approximations to the shape of the crystal potential, unlike methods employing the atomic sphere approximation (ASA) which assume spherical symmetry around each atom. Like most modern electronic-structure methods, the LAPW method is a variational expansion approach which solves the equations of DFT by approximating solutions as a finite linear combination of basis functions. What distinguishes the LAPW method from others is the choice of basis. The LAPW basis is constructed to be particularly accurate and efficient for the solution of the all-electron ab initio electronic-structure problem, where solutions are rapidly varying and atomic-like (like isolated-atom solutions) near the atoms but more smoothly varying and not atomic-like throughout the rest of the cell.

An efficient basis for such solutions is constructed by first partitioning the cell into two parts: spheres around each atom, and the remaining interstitial region (Fig. 1). The LAPW basis functions are then constructed by connecting planewaves (sinusoidal functions) in the interstitial region to linear combinations of atomic-like functions in the spheres. The basis is thus atomic-like where the solution is atomic-like, and completely general (planewaves) where the solution is not atomic-like and may vary widely from one crystal structure to another. The atomic-like nature of the LAPW basis in the vicinity of the atoms leads to an efficient representation, while the planewave nature in the interstitial region allows for highly accurate solutions for any atomic arrangement: close-packed or open, high-symmetry or low, surfaces or bulk. As in the LMTO method, one advantage of the LAPW method over pseudopotential based methods is that core and semicore electrons are explicitly included in the calculations. This can be especially important at high pressures, where outer core states may change substantially. In addition, all materials require about the same computational effort, with no dependence on the depths of pseudopotentials. However, as may be expected, by neglecting changes in core/semicore states, pseudopotential-based methods can be more computationally efficient. In the EOS & Theory group, we employ a modern variant of the LAPW method [2-4] which extends the above discussed classical LAPW basis in such a way that fewer basis functions are required to achieve a given accuracy, and larger, more complex systems can be considered. 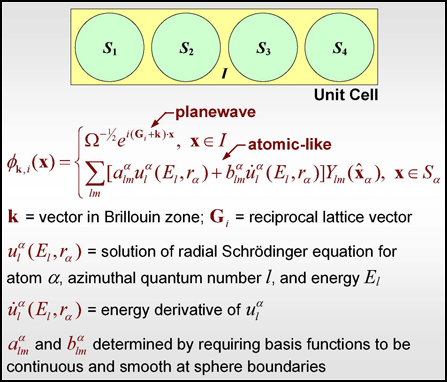 Linearized augmented planewave (LAPW) basis. The LAPW basis is constructed to provide an efficient representation of the highly inhomogeneous wavefunctions which occur in all-electron ab initio (from quantum-mechanical first principles) electronic-structure calculations. It is constructed by partitioning the unit cell into two parts: spheres around each atom, where the wavefunctions are rapidly varying and atomic-like; and the remaining interstitial region, where the wavefunctions are more smoothly varying and not atomic-like. Each basis function is then defined as a planewave in the interstitial region connected smoothly to a linear combination of atomic-like functions in the spheres, thus providing an efficient representation throughout space. A similar representation is used for potentials and charge densities.