The full-potential linear muffin-tin orbital (FP-LMTO) method is a specific implementation of density functional theory within the local density approximation (LDA). In this method there is no shape approximation to the crystal potential, unlike methods based on the atomic-spheres approximation (ASA) where the potential is assumed to be spherically symmetric around each atom. For mathematical convenience the crystal is divided up into regions inside muffin-tin spheres, where Schrödinger's equation is solved numerically, and an interstitial region. In all LMTO methods the wavefunctions in the interstitial region are Hankel functions. Each basis function consists of a numerical solution inside a muffin-tin sphere matched with value and slope to a Hankel function tail at the sphere boundary. The so-called multiple-kappa basis is composed of two or three sets of s, p, d, etc. LMTOs per atom. The extra variational degrees of freedom provided by this larger basis allow for an accurate treatment of the potential in the interstitial region. The Hankel function kinetic energy, -kappa2, determines the exponential decay as e-kappa*r. One advantage of this method over pseudopotential-based methods, in the context of high-pressure physics and elsewhere, is that the core and semi-core electrons are explicitly included in the calculations. In addition, to first order all materials require equal computational effort, with no dependence on a deep versus shallow pseudopotential. However, pseudopotential-based methods are generally much more computationally efficient for large numbers of atoms, due in part to a simpler mathematical foundation that is more amenable to clever algorithmic shortcuts. In the EOS & Materials Theory Group there are two variants of the FP-LMTO method in use, one developed by Methfessel and van Schilfgaarde[1-3] and the other by Wills[4]. 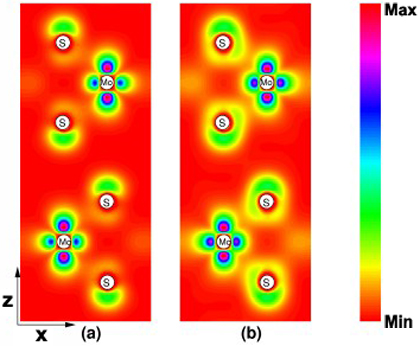 Calculated energy-resolved electronic charge densities for the layered material MoS2. This material is used as a lubricant and also in batteries when intercalated with metal atoms such as Li. The atoms are arranged in weakly interacting sheets, just as in the case of graphite. However, in the case of MoS2 each sheet is composed of a layer of Mo sandwiched between two S layers. The figure shows the charge density calculated for two of these sheets. The plot in (a) corresponds to only those electronic states that are within 1 eV of the valence band maximum (VBM) while (b) corresponds to those states that are between 1 and 2 eV below the VBM. The contributions from the Mo 4d and S 3s and 3p are clearly visible. The nature of the sulfur states in particular is seen to change as we move deeper into the valence band.