A. Landa, A. McMahan

Dynamical Mean Field Theory (DMFT) has recently offered a practical way to treat the critical on-site correlations which dominate the properties of many f-electron metals and f- and d-electron compounds. The fundamental approximation of the method is the assumption of a local or k-independent electron self energy; however, the essential frequency dependence is retained (thus dynamical mean field).

This approximation allows for a self-consistent mapping of the full many-body problem onto an effective Anderson impurity Hamiltonian, which may then be solved by standard approximations, or by essentially exact Quantum Monte Carlo (QMC) techniques, in order to obtain the self energy. While the original applications of DMFT centered on models such as the Hubbard Hamiltonian, more exciting recent work has demonstrated the successful merger of the realism of local-density-approximation (LDA) methods with ability to treat strong electron correlations by DMFT. In this combined "LDA+DMFT" approach, LDA calculations provide the one-body part of an all-valence-orbital effective Hamiltonian that contains all the numerical richness and material specificity characteristic of LDA methods. To this is added the correct two-body on-site Coulomb interaction, whose strength is determined by companion "constrained-occupation" LDA calculations. The resultant all-valence-orbital many-body Hamiltonian is then solved by the DMFT method. Such LDA+DMFT calculations have been carried out recently for the lanthanides (Refs. 1-4) and actinides (Ref. 5). 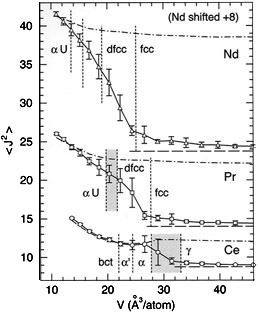 LDA+DMFT calculations of the bare or instantaneous squared local 4f moment (solid curves with data points) in Ce, Pr, and Nd, as a function of volume. The observed experimental phases are labeled, including volume collapse transitions (shaded). The moments are seen to agree with the localized atomic-limit expectations (horizontal long dashed lines) at large volumes, and approach an approximation to the itinerant limit (dash-dot lines) at small volumes. In Ce, the rapid change in moment coincides with the volume collapse, whereas, in Pr and Nd, this behavior occurs in the observed stability range of the dfcc phases. For more detail, see Ref. 3.

An exact QMC technique, used in Refs. 1-5, is based on the so-called auxiliary-field (Hirsch-Fye) scheme for a truncated Coulomb interaction with only the density-density contribution taken into account and multiplet effects (non-diagonal contributions to the Hamiltonian) neglected. However, these non-diagonal contributions can reduce the effects of large spin-orbital splitting in relativistic DFT calculations for delta-Pu and produce a multiplet structure near the Fermi Level. In order to account the complete form of the electron-electron interaction into the Schrodinger equation, a recently developed continuous-time QMC (CT-QMC) scheme has been applied to investigate effects of full Coulomb interaction on the electronic spectrum of delta-Pu (Ref. 6). Obtained results demonstrate that interplay of the full Coulomb interaction with spin-orbit coupling is crucial for understanding the experimentally observed photoemission spectra of plutonium near the Fermi level - the position of the quasiparticle peak near the Fermi level as well as the spin-orbit splitting of the multiplet structure well reproduce the main features of the experimental photoemission spectra. 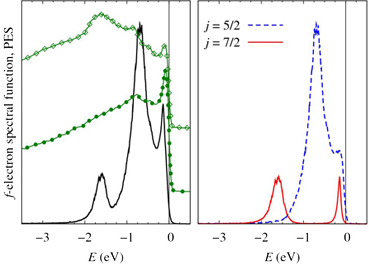