Atomistic simulation models materials at the level of atoms. In the case of Molecular Statics (MS), the relaxed configuration of atoms is found using conjugate gradient or some similar (constrained) minimization of the total energy. This provides information about crystal lattice structure in different phases and under different conditions. In the case of Molecular Dynamics  (MD), the actual motion of the atoms is simulated by evolving the atomic configuration in time according to Newton's equation (F=ma). This allows the direct study of the dynamical and thermodynamical evolution of the system. A variety of methods may be employed to compute the total energy and the MD forces, depending on the size of the system and the level of accuracy required. We have used first-principles, quantum-mechanical techniques (such as Quantum Molecular Dynamics), quantum-based interatomic potentials derived from ab initio theory (such as MGPT) and empirical interatomic potentials (such as the Embedded Atom Method, Finnis-Sinclair potentials, and Streitz-Mintmire potentials). Parallel versions of the atomistic codes have been developed to take advantage of the powerful ASC computers  at LLNL. 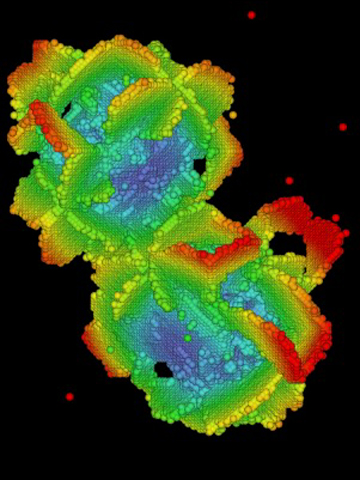 A molecular dynamics (MD) simulation of void interactions in copper. MD provides a means to study the dynamics of the void growth and coalescence in ductile metals.