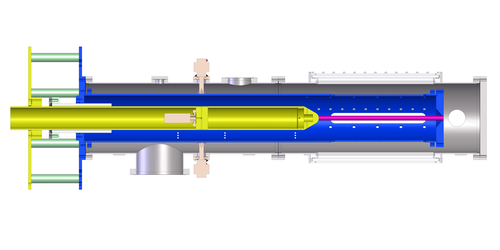 A schematic depiction of the Fusion Z-Pinch Experiment (FuZE) device.

Controlling nuclear fusion for power production is expected to require large and expensive magnetic coils or laser systems to create, heat, confine, and control the hot plasma needed to sustain fusion reactions. The idea of directly driving a column of plasma with an electrical discharge, known as Z pinch, was a simple and early method envisioned as a possible path to fusion energy. However, plasma instabilities limited the heated volume to only a few hot spots along the plasma column and limited plasma confinement to a few nanoseconds. Finding a way to stabilize a Z pinch has been a goal for many years.

For the first time, researchers from Lawrence Livermore and the University of Washington have demonstrated a stabilizing shear in the axial flow that sustains the plasma 5000 times longer than previously achieved, with a discharge current that is large enough to provide fusion-relevant plasma density and temperature. During the stable part of the discharge, the team detected the sustained release of telltale energetic neutrons characteristic of thermonuclear fusion.

The approach provides a path to nuclear fusion without magnetic coils or large lasers, with the potential to be used for long-duration fusion burns in a compact and low-cost device.

The paper describing the approach was featured in Physics, an online magazine from the American Physical Society.