PLS postdocs battle it out at the 2021 Research Slam!

Lawrence Livermore National Laboratory’s (LLNL’s) fifth annual Research Slam! took place virtually on October 6th and featured 14 LLNL postdocs, 9 of which represented the Physical and Life Sciences Directorate (PLS). Over 300 people logged on to attend the live two-hour event, enthusiastically cheering for their favorite postdocs in the comment section. Each finalist was given the opportunity to showcase their work in a three-minute presentation that answered the question, “Why is your research important?” The panel of judges selected PLS postdocs for second and third place, with Sarah Sandholtz placing second, and Brandon Foley placing third. In addition, the attending audience selected PLS’s Mariana Desiree Reale Batista for the first-ever People’s Choice Award.

A shot in the dark or a surefire hit?—Identifying drug targets for COVID-19 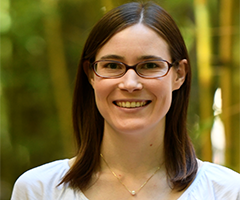 Sarah Sandholtz highlighted how her research can help scientists at the onset of a pandemic, allowing them to quickly identify drug targets for new diseases. Sarah compared the development of drug therapies to shooting darts at a dartboard and hitting a bullseye. The darts represent the drug compounds, and the bullseye represents the drug target, or the part of the protein that will react with the drug to alter the protein so that it does not make people sick. In drug discovery, there are multiple dartboards with multiple bullseyes, making it difficult to know which bullseye to hit.

To narrow down the possibilities, Sarah developed an automated, computational procedure for analyzing the patterns of binding in modeled SARS-CoV-2 proteins. Based on those patterns, she proposed two rules of thumb: the more structurally similar a SARS-CoV-2 binding site is to the binding sites of other viruses, and the more “drug-like” the molecules that bind to that site, the greater potential the given site has as a drug target. Following this approach has allowed researchers to focus on developing drugs for only the most promising targets. Sarah says, “Tackling issues of national importance while surrounded by talented colleagues who help me develop as a scientist make being a postdoc at the Lab both a pleasure and a privilege.” 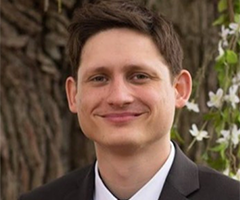 In his presentation, Brandon Foley discussed how his revolutionary computational method could potentially aid in the conversion of CO2 into usable fuels. Brandon revealed a new area of research, termed “dynamic catalysis,” which shows that the rate of chemical reactions can be accelerated by high-frequency oscillation of a material’s properties (e.g., electric potential and strain). However, the numerical simulation of these dynamic systems is computationally expensive, taking over a month to evaluate one material.

Brandon simplified the governing equations for dynamic catalysis and converted the equations from a complex calculus problem to a simple algebraic problem, making it easier for a computer to solve. Brandon’s method reduces the computational time for these calculations by a factor of one billion, equivalent to computing 30 years’ worth of calculations in just one second. He notes, “It is exciting to showcase that an ‘old dog’ research area like catalysis still has ‘new tricks’ and remains a worthy area for continued growth and research.”

How would you survive the next heatwave without electricity? 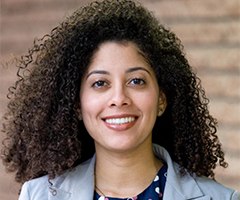 In her discussion, Mariana Desiree Reale Batista introduces a life-saving, electricity-free cooling alternative. Mariana explains that the Earth’s surface loses heat by infrared radiation (IR); this causes heat to escape into space, resulting in cooler temperatures at night. During the day, however, the amount of solar energy exceeds IR cooling capabilities, causing hotter temperatures. Averaged over time, heat waves are the deadliest type of natural disaster in the United States, given that 13% of the global population is without electricity. Mariana’s solution involves a simple household item—salt, which can help this cooling process occur even under direct sunlight.

By transforming salt cubes into a fluffy powder called aerogel, Mariana and her group have developed the perfect recipe for a salt material that emits IR, reflects sunlight, and provides insulation. The aerogels can then be packed into panels, potentially reducing surface temperatures by up to 36oF. Not only can this affordable technology potentially save lives, but annually it will help reduce the $29 billion that Americans spend on electricity for A/C, while also reducing the 117 million metric tons of CO2 released into the air. She says, “Receiving the People’s Choice Award is an honor. It motivates me even more to keep investigating towards the advancement of this cooling technology and excites me to know that our research resonates with so many people, and that they, too, are passionate about protecting the global community and saving lives.”