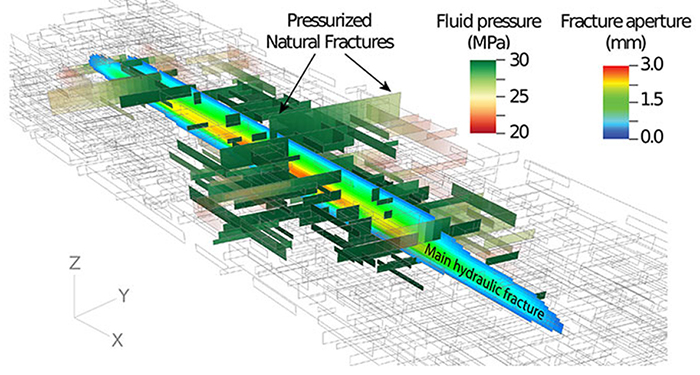 Massively parallel physics simulations provide Lawrence Livermore with a wealth of data to complement experimental observation. Within the Physical and Life Sciences Directorate, computational geoscience is a cornerstone of the Atmospheric, Earth, and Energy Division's (AEED) efforts to advance energy and environmental technology. Because the nation's security depends in part on energy independence, a Livermore team developed GEOS—a three-dimensional, multi-physics modeling code that addresses problems of subsurface fracturing in rock. A key feature of GEOS is the ability to simulate the evolution of hydraulically driven fractures through rock. Hydraulic fracturing has driven the oil and gas boom over the last decade, but comprehensive understanding of the physical mechanisms that govern the process remains elusive.

GEOS's functionality has helped shed light on the key processes that influence hydraulic fracturing by predicting how rock will fracture when subjected to high-pressure fluid injection. The GEOS team has studied designs to increase the efficiency of hydrocarbon extraction while striving to better understand associated financial and environmental impacts, such as water usage. The Laboratory's capabilities in this area are becoming more important as the United States increases domestic oil and gas production. (See A Closer Look at the Rocky Underground.)

Born from a 2011 project funded by the Laboratory Directed Research and Development Program (LDRD), GEOS has matured into a high-demand application. According to GEOS program leader Rick Ryerson, the code quantitatively describes the physical processes and reservoir characteristics that control fracture evolution. The goal is to use field data from different geologic settings to predict reservoir response and optimize stimulation practices, such as well spacing and pumping schedules, without appealing to the empirical models or approximations typically used in gas and oil production.

GEOS's unique features have attracted industry attention, and multiple research efforts are under way. In addition, Livermore's team has begun work with Lawrence Berkeley National Laboratory to tackle long-term subsurface resource challenges via exascale computing, which is defined as a theoretical target capacity of a quintillion (1018) calculations per second. The collaboration has been funded by the Department of Energy's Exascale Computing Project (ECP) through the next four years.

For the complicated physics of subsurface simulations, GEOS's handling of rock deformation and fracture within varying spatial and temporal scales is a key technology in the new ECP project. GEOS will be coupled with a Lawrence Berkeley code called Chombo-Crunch, which simulates pore-scale flow and geochemical reactions of viscous fluids like oil. Coupling the Laboratories' codes will maximize their combined power on real-world problems facing oil and gas extraction operations. One such issue is wellbore performance. When a well is drilled, many factors contribute to its integrity: the well's physical material and mechanical components plus the surrounding rock, fluids, and gases. Leakage within this complex environment can contaminate nearby water supplies. With hundreds or thousands of wells located near large drinking-water reservoirs, security and safety are critical problems. When GEOS and Chombo-Crunch are integrated, scientists will be able to model processes that occur on micro- and macro-scale resolutions, from nanometers to kilometers. GEOS architect and lead developer Randolph Settgast explains, "Using the coupled code, we will be able to simulate the performance of a vertical well from pore-scale flow and chemistry all the way up to large-scale deformation and fracture."

The magnitude of these multiphase simulations requires more computing power than presently available, so GEOS/Chombo-Crunch must be able to run efficiently on exascale systems. "There are always technical challenges when moving to relatively new advanced architecture systems," says Settgast. The team is restructuring GEOS to utilize the Laboratory's CS Toolkit. Leveraging Livermore's RAJA performance portability layer and the CHAI (Copy Hiding Application Interface) layer, the GEOS-ECP team will produce a programming model that optimizes execution of GEOS algorithms on Sierra and CORI-Phase 2, Lawrence Livermore and Lawrence Berkeley's respective supercomputers. This approach will ensure portable performance with an eye toward upcoming exascale architectures. After optimizing the coupled code framework on the new hardware, the teams will be able to assess the risks of previously intractable problems dealing with the extraction of energy from subsurface reservoirs.

Beyond exascale goals, the GEOS team continues work on multiple fronts. Three LDRD initiatives showcase the range of GEOS's capabilities: One team is modeling shock physics of extraction through explosive stimulation, while another group analyzes stress and strain data from fiber-optic acoustic sensors inside a well. A third team simulates the flow of oil and gas recovered from drilling sites. Livermore scientists are also advising California's Division of Oil, Gas, and Geothermal Resources on a steam injection method of hydraulic fracturing. In addition, the Laboratory has cooperative research and development agreements with two commercial oil and natural gas companies, Total S.A. and Pioneer Natural Resources, to optimize their operations. "The current process leaves a lot of oil and gas in the ground, so even a small increase in efficiency helps," notes Settgast.

Along this diverse and fast-moving trajectory, GEOS is poised to become a major tool for energy safety and security. Livermore's goal of developing a unified platform for geothermal, hydraulic fracturing, and reservoir modeling is coming to fruition with GEOS, thanks to an interdisciplinary team. As Ryerson says, "GEOS has benefited from contributions across a range of disciplines including mechanical engineering, seismology, hydrology, and computational science, along with the expertise and experience of our industrial partners."