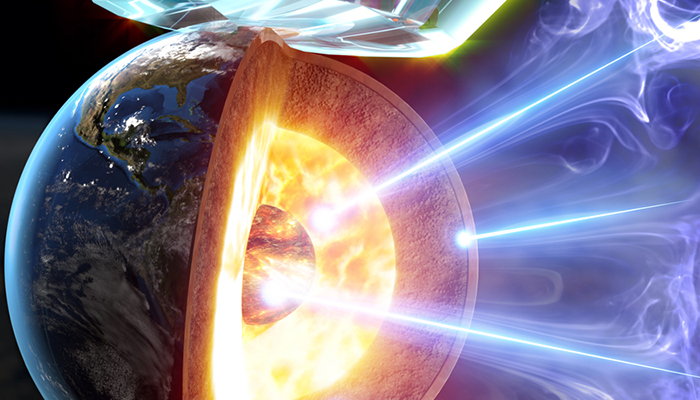 Artist’s rendering of thermodynamic conditions at Earth’s core, where metals such as iron and nickel become electronegative and attract electrons.

At temperatures and pressures typically encountered on Earth’s surface, metallic elements naturally form compounds with electronegative elements. For example, iron reacts with oxygen to form rust, Fe2O3. In contrast, noble gas elements such as argon, neon, and xenon show very little reactivity with other elements. Under the extreme conditions at Earth’s core, however, researchers are finding that these patterns do not always hold true. Lawrence Livermore scientists, in collaboration with scientists at the University of Saskatchewan, the Carnegie Geophysical Laboratory, and the University of Chicago, recently discovered that it is possible to create stable xenon-iron and xenon-nickel compounds at Earth-core thermodynamic conditions. The research is published in Physical Review Letters.

Using synchrotron x-ray diffraction and Raman spectroscopy diagnostics in concert with first-principles calculations, the team explored iron/nickel-xenon reactions at pressures greater than two million times Earth’s atmospheric pressure and temperatures above 2000 Kelvin to simulate thermodynamic conditions representative of Earth’s core. “Our aim was to solve the missing xenon paradox, that is, xenon depletion in Earth’s atmosphere,” explained lead author Elissaios Stavrou. The team was surprised, however, to see a clear signature of a reaction between iron and nickel with xenon during the experiments. Heavy noble gas elements like xenon are known to react with strong electronegative elements, such as halogens, but this is the first experimental evidence of a noble gas element reacting with a metal.

Calculations by the team’s theorists revealed how the chemical properties of the elements changed under extreme conditions. “The metals effectively became halogen-like under the Earth-core conditions we created in the laboratory,” said Joe Zaug.