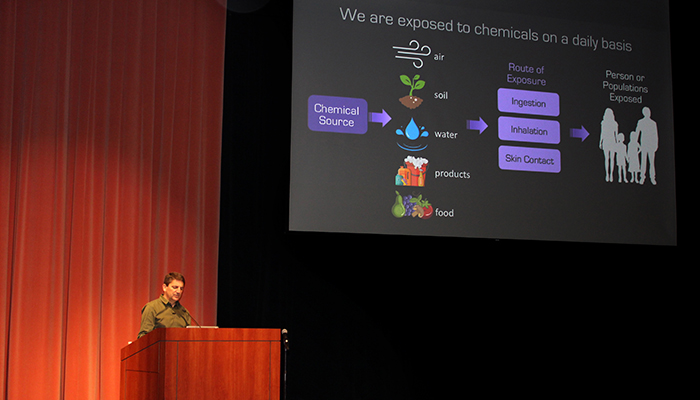 LLNL biomedical scientist Mike Malfatti explains the many ways humans are exposed to chemicals every day. An accelerator mass spectrometer is a “marvelous machine” that detects low levels of chemicals in biological materials such as bone, blood, and tissue. (Photo by Joanna Albala/LLNL Science Education Program.)

An accelerator is indeed a marvelous machine. It uses an ion source, powerful magnets, and high voltage to speed up and separate the ions—electrically charged atoms—within a sample material. LLNL is home to multiple accelerator instruments, including one dedicated to biological research. Malfatti stated, “We can use this unique tool to answer biomedical questions that otherwise can’t be addressed.”

This highly sensitive method of detecting and measuring isotopes is a boon for pharmacology and toxicology studies that look for trace amounts of drugs, nutrients, and chemicals in biological tissue. As Malfatti noted, real-world applications are numerous and include evaluating drug absorption and metabolism as well as assessing exposure to carcinogens and environmental toxins.

Carbon is the key to biological AMS studies. All living organisms are made of, and absorb, carbon, so scientists can measure the abundance of carbon atoms in biological samples. For example, carbon-14 (C-14) is a long-lived radioactive isotope of carbon that can be used as a tracer. Scientists label a chemical with a tiny amount of C-14 to follow the chemical’s progress through a biological system like the human body. AMS’s high sensitivity can detect a single atom of C-14 among 1 quadrillion atoms.

During the lecture, DVHS students took the stage to illustrate two important concepts. First, they demonstrated radioactive decay. Each student held a sign labeled “C-14.” As Huang called out the passage of time—5,730 years—the group split in two to show the amount of C-14 decaying by half. Eight students then divided into groups of four, then four into two, with each division representing another 5,730 years of decay. Malfatti explained, “We can take advantage of the isotope’s half-life to obtain a precise measurement with AMS.” 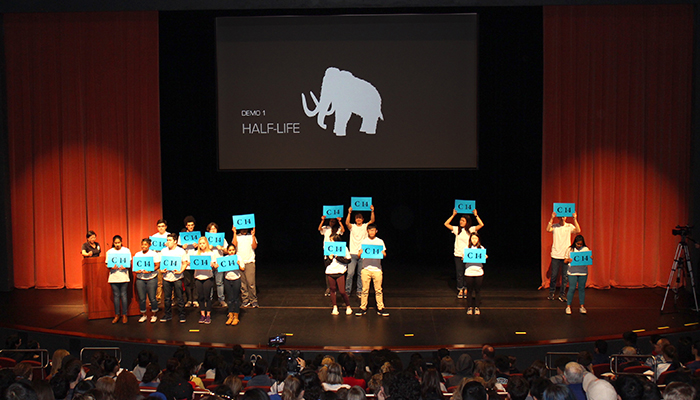 In the second demonstration, students showed how AMS separates isotopes. Some students held signs for three carbon isotopes (C-12, -13, and -14), while others stood for the magnets, accelerator, and detector components of an AMS system. The students moved around the stage mimicking the path of ions through an accelerator. Huang compared this movement to both a car wash and a race, wherein certain isotopes (C-12, C-13) are scrubbed away and the isotope of interest (C-14) becomes the “winner.” Students representing the winning atoms of C-14 wore flashing LED sunglasses to symbolize C-14’s radioactivity and detectability.

With these concepts established, Malfatti explained how LLNL scientists prepare samples for AMS. Carbon-based materials must be converted into solid carbon graphite—a lengthy process involving drying, combustion, and multiple chemical reactions. However, LLNL’s biological AMS resource skips these graphitization steps. Instead, a liquid sample is deposited droplet by droplet onto a moving wire that passes through cleaning and combustion ovens for conversion to carbon dioxide gas, which is then loaded directly into the accelerator. This technology increases throughput and reduces the time and cost of preparing biological samples.

Before taking questions from the audience, Malfatti summarized three biomedical applications of AMS. First, AMS enables scientists to assess chemical toxicity by measuring how much a chemical binds to or damages human DNA. Studies using rats or other animals cannot reliably predict human outcomes, such as the toxicity risk associated with a low dose of a chemical. “With AMS, we can safely assess toxins and drugs in humans at real-world exposures,” said Malfatti.

Second, drug development can benefit from AMS technology by shortening the time to market. Microdosing provides a way to test drug compounds earlier in the development process. A human subject receives very low doses of a drug and radioactive tracer—too low to be toxic but still detectable by AMS—and the results can be extrapolated to therapeutic levels.

Finally, AMS contributes to personalized medicine by helping researchers identify and predict populations who will respond to a drug. In a cancer chemotherapy study, human blood samples containing microdoses of a C-14–labeled drug were analyzed with AMS to quantify the drug’s DNA binding. Malfatti noted, “This technology allows for differentiation of patient outcome. Doctors can use this information to decide whether to pursue treatment or explore other options.”

For Malfatti, a first-time Science on Saturday presenter, community outreach is important. “We have a responsibility to inform the public about the great science occurring at the Laboratory. Hopefully students will get excited and consider a scientific career,” he said. Malfatti and Huang delivered the talk twice, and both sessions were well attended with lengthy question-and-answer discussions afterward. “Feedback was very positive, and the audience was inquisitive,” he continued.

AMS has been a crucial part of LLNL’s biotechnology capabilities for decades. Read more about biological AMS research at LLNL. Watch Science on Saturday lectures on LLNL’s YouTube channel .

This work was performed under the auspices of the U.S. Department of Energy by Lawrence Livermore National Laboratory under Contract DE-AC52-07NA27344.