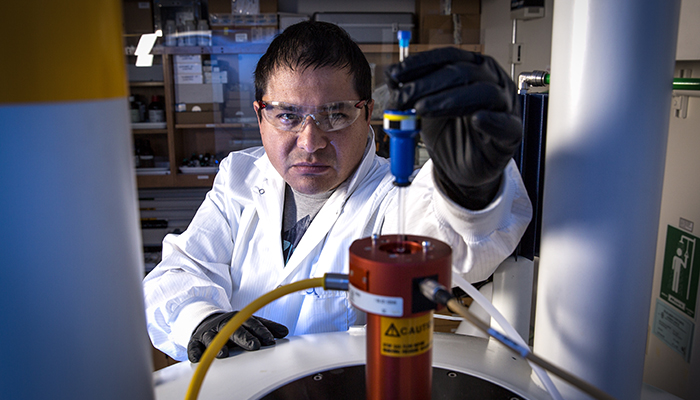 LLNL synthesis chemist Carlos Valdez, who was part of the Livermore team that took last fall’s proficiency test of the Organization for the Prohibition of Chemical Weapons, analyzes a reference standard using nuclear magnetic resonance spectroscopy. Photo by George Kitrinos/LLNL.

During their 15 years as a certified laboratory for the Organization for the Prohibition of Chemical Weapons (OPCW), a score of LLNL chemists have developed some first-rate habits.

One of them is earning “A” grades on the organization’s environmental proficiency tests. In recently-announced results, LLNL earned its eighth straight “A” grade during last fall’s OPCW proficiency tests, which are typically announced three to four months after the test.

Every October, Livermore scientists and those from other laboratories around the world attempt to identify any “suspected” chemical weapons compounds in six samples within a 15-day period in the OPCW proficiency tests.

To retain their OPCW certification, LLNL and the other OPCW-designated laboratories must maintain a three-year rolling average of at least two “A” grades and one “B” in the ongoing tests.

Despite earning eight straight “As,” Armando Alcaraz, the principal investigator for the Lab’s OPCW efforts since 2000, emphasizes that there is never any room for complacency during the proficiency tests.

“One mistake could lead to missing a reportable compound and result in a full letter grade reduction, or even worse, the misinterpretation of analytical data could lead to a false positive, which results in an ‘F’ grade and the loss of a lab’s OPCW designation,” Alcaraz said.

“We take every proficiency test very seriously because we understand that each test is different and that the spiking materials and matrices can vary in complexity,” Alcaraz explained. “You cannot standardize your approach to analyzing these proficiency test samples.”

In the proficiency test for the two types of samples, the Livermore researchers correctly identified all seven reportable spiked chemicals as well as a non-scheduled reportable chemical in one of the three emulsions.

“This year’s proficiency test was designed to reflect some of the real-world samples that OPCW labs have had to analyze,” Alcaraz said. “The samples contained some of the most chemically complex matrices participating laboratories have encountered in these tests.

Another challenge for the Lab chemists, he said, came as the team tried different methods to extract target analytes from the aqueous decontamination emulsion samples using solvents they normally utilize. Instead, the solvents formed gel-like materials with the emulsion.

“As a result, we had to find alternative solvents that wouldn’t produce a gel with the emulsion, enabling us to isolate our key compounds,” Alcaraz said. 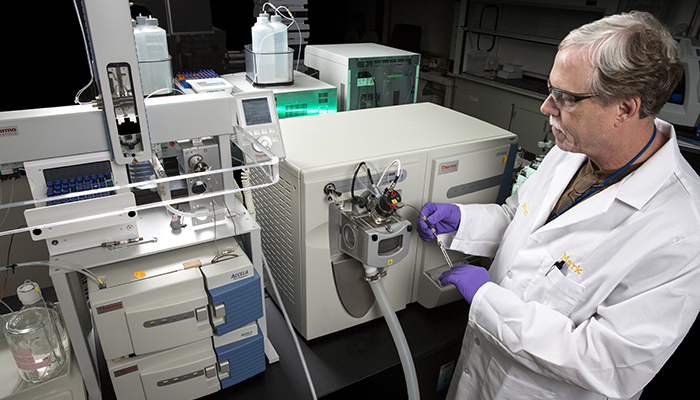 LLNL analytical chemist Mark Dreyer, one of the Lab researchers who participated in last fall’s proficiency test for the OPCW, examines samples with liquid chromatography–mass spectrometry. Photo by George Kitrinos/LLNL.

During each proficiency test, the participating OPCW labs receive two sample matrices, each containing three samples, none of which are identified—a blank sample, a quality control sample and an authentic sample.

LLNL received its original OPCW certification in 2003. Its work is carried out by the Laboratory’s FSC as a part of the Global Security Principal Directorate’s Nonproliferation Program. The other U.S.-designated laboratory is the Aberdeen Proving Ground, Maryland-based Edgewood Chemical Biological Center.

The OPCW oversees compliance for the Chemical Weapons Convention (CWC) treaty, which has been in force since 1997 and currently has 192 nations. One nation has signed but not ratified (Israel). Three other states have neither signed nor ratified (Egypt, North Korea and South Sudan).

Under the CWC treaty, the development, production, acquisition, stockpiling and use of chemical weapons is banned, as is the transfer of chemical-weapon-related technologies.

Under a condition set by the U.S. Senate during its ratification of the CWC, all samples taken by OPCW inspectors at U.S. chemical plants must be analyzed in the United States.

The samples for last October’s proficiency test, taken by LLNL and 13 other laboratories around the world, were prepared by the DGA CBRN Defence Laboratory of France. The participating laboratories’ test reports were then evaluated by the VERTOX Laboratory of India. (Two of Livermore’s “A” grades were received for serving as the OPCW’s evaluation lab, grading analyses).

Out of the 14 laboratories that participated in the October OPCW proficiency test, six earned “A” grades, two received “Bs,” three garnered “Cs,” two received “Ds” and one received an “F.”