New viruses are discovered every year, and many pathogens can be transmitted to humans. “Three-fourths of recently discovered disease agents are viruses,” said Borucki, citing examples of Zika, Ebola, West Nile, and SARS (severe acute respiratory syndrome) viruses. “Rabies is one of the deadliest pathogens known.” Rabies reservoirs in the United States include bats, skunks, foxes, and racoons. Cross-species transmission occurs through bites, scratches, or handling of rabid animals.

Viral behavior influences disease diagnosis and development of vaccines and treatments. Most emerging viruses have genomes made of RNA rather than DNA. RNA genomes mutate more rapidly than DNA genomes, which enables RNA viruses such as rabies to adapt to new host species. The high error rate virus’s replication cycle leads to mutations within the rabies genome, forming new genotypes that differ slightly from the original. The more variations there are, the more difficult prevention and treatment become. Lopez demonstrated this phenomenon of genetic drift with a game of “telephone.” Ten students joined her onstage and stood in a row. A student at one end whispered a phrase to the next student, who whispered it to the next student, and so on until the tenth student heard the phrase. Within seconds, “Rabies outbreaks are scary” mutated into “Babies take out fairies.” 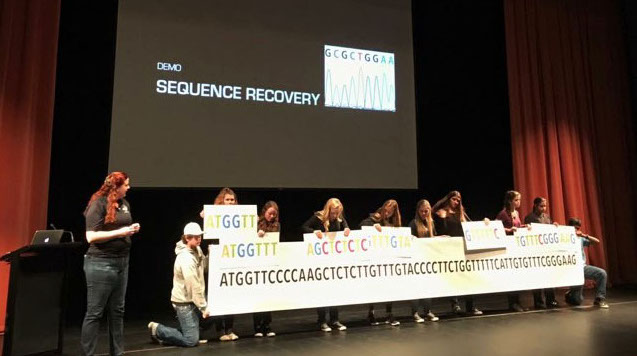 To understand and prevent epidemics, scientists have been sequencing genetic material of virus populations and sorting through the resulting large data sets. “Using computers for deep interrogation, we can predict how a virus population will respond in a new environment,” explained Allen. DNA consists of combinations of four nucleotide bases: adenine (A), cytosine (C), guanine (G), and thymine (T). A and T bind to each other, and C and G bind to each other. During sequencing, scientists look for patterns of nucleotides in the RNA or DNA fragments to determine the genotypes present in a sample. Computers are used to “read” the large volumes of sequence data generated by new sequencing technology. The first iteration of the human genome was sequenced in 2001, but due to significant advances in sequencing technology, genomes are now sequenced with relative ease.

“It’s an exciting time for genome sequencings,” stated Allen. With the introduction of new technology, such as a “flowcell” device that detects millions of DNA fragments simultaneously, the cost of sequencing has decreased over the last 15 years. Evolved computing capabilities enable researchers to expand sequencing beyond humans. “Reconstructing a viral genome is a computational problem,” noted Allen. “Our goal is to decode the ‘mutant spectrum’ of rabies—to map fragments to the most dominant genome in the virus population and identify its genetic variants.”

Lopez’s students returned to the stage to show how DNA fragments are mapped during sequencing. After unfurling a banner printed with A-C-G-T combinations found in the rabies genome, several students carrying placards with shorter sequences attempted to match their fragments to the longer sequence. According to Allen, this process of sequence recovery for a single sample can take several hours on a computer cluster. Borucki and Allen presented the results of a case study that combined next-generation DNA sequencing and computational analysis. In 2009, Humboldt County, California, experienced a 355% increase from the previous year in the number of rabid foxes discovered in the county. Collaborators at the California Department of Health sent samples of brain tissue from infected animals to LLNL for analysis. Borucki’s team grouped the virus genomes according to how alike or different they were, then analyzed changes in the nucleotides and amino acids.

“We expected foxes and skunks to have different rabies genome types because the virus adapted to different hosts,” explained Borucki. However, the data showed clusters of foxes and skunks with rabies genotypes differentiated by date and geographic location, with specific genetic changes associated with a large subset of foxes. These results confirmed that the virus jumped between species and moved quickly through foxes. New sequencing technology revealed that the genotype responsible for the outbreak was present at very low levels in rabies samples from 1995. In addition, trace amounts of the 1995 pre-outbreak rabies genotype were present in 2009 outbreak samples. “We were able to see the rabies genome with greater resolution,” she stated. Borucki and Allen note that more sequencing can help predict which new viruses pose a threat when transmitted to human hosts.

The lecture concluded with a Q&A session, and the scientists remained in the auditorium for one-on-one questions and photographs with attendees. “The event was a good opportunity to receive feedback from people outside our field,” said Allen, who enjoyed the quality of the questions and noted the challenges of explaining the research to a younger audience. “We have to present material that is scientifically sound while still accessible.” For Borucki, the audience turnout was exciting. “I really like talking to students and hope to inspire the next generation of scientists,” she noted.

LLNL’s lecture series spans four weeks every February and offers local students and the public insight into research occurring at the Laboratory. Scientists partner with an area high-school teacher to deliver information in a straightforward, entertaining way. This season’s theme is “Ingenious Inventions.” Lectures are available via the Laboratory’s YouTube channel.