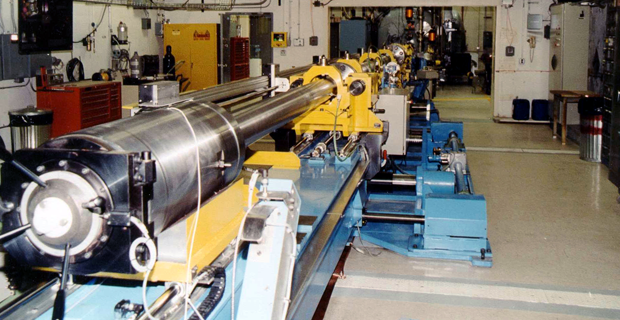 The JASPER two-stage gas gun, as seen from the loading port. The target chamber is visible in the background.

A successful PDVEA (Photonic Doppler Velocimetry Encapsulate Alpha) experiment was performed at JASPER on December 3, 2013. This was the fifth experiment in the PDVEA series and the first plutonium-plutonium experiment fired at JASPER this fiscal year. The PDVEA series of experiments are designed to measure the shock Hugoniot of alpha plutonium and yield extremely high accuracy data (less than 1 percent error bars) on fundamental properties of materials critical to the Laboratory's Stockpile Stewardship mission. The high quality of the JASPER data provides new insights into the behavior of plutonium. The high standard of the JAPSER data is the result of collaboration between LLNL and NNSS. The plutonium sample was fabricated at LLNL, assembled into the PDVEA target configuration at NNSS/Device Assembly Facility, and transferred to NNSS/JASPER for the shot experiment. Additional shots in this series are planned for FY14. We are also developing other target designs to further explore alpha plutonium shock behaviors in FY14 and beyond.