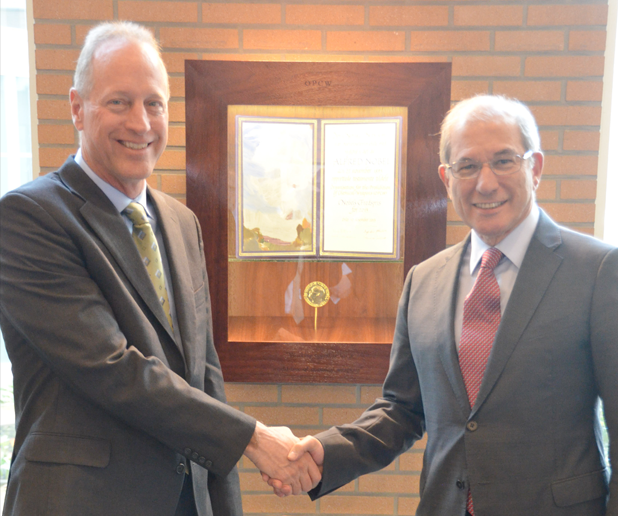 Bruce Warner (left), the Lab's principal associate director for Global Security, is shown with Ahmet Üzümcü, the director general for the Organization for the Prohibition of Chemical Weapons (OPCW) on March 31 at The Hague in the Netherlands. Above their handshake is the 2013 Nobel Peace Prize, which was awarded to the OPCW for its extensive efforts to eliminate chemical weapons.

Come October every year, a corps of about 18 Lab chemists and other first-rate researchers from around the world face the challenge of the Organization for the Prohibition of Chemical Weapons' (OPCW) proficiency tests. Armando Alcaraz, the principal investigator for the Lab's OPCW efforts since 2000, likens the proficiency tests to taking a crucial final in college that determines whether a student passes or fails. Livermore's chemists, like those from 21 other laboratories in different nations, attempt to identify any "suspected" chemical weapons compounds in six samples within a 15-day period. To maintain their certification, LLNL and other OPCW-designated laboratories must maintain a three-year rolling average of at least two "A" grades and one "B" in ongoing proficiency tests. LLNL recently received its grade - an "A" - for last fall's proficiency test. "As soon as the samples arrive, the clock starts ticking," Alcaraz says. "Once we accept the samples, the OPCW knows that we only have 15 days to analyze the samples and prepare our report." During the proficiency tests, a typical day for the Laboratory's OPCW team runs from 8 in the morning to 10 o'clock at night. "It all starts to jell just before the sample arrives. We have a war room in Bldg. 132N where we meet and we start strategically planning how the samples will be analyzed. We look at the tasks that need to be done and then individuals are assigned to those jobs," Alcaraz adds. In his view, each researcher plays a critical role in the team's performance for the proficiency tests. "Each person has to do their part and we need everyone's help in identifying the reportable 'spiked' chemicals. These proficiency tests are some of the most difficult analytical challenges that scientists around the world can design." Last fall's most recent proficiency test for Lab chemists started on Oct. 21 when two sample sets, one of organic waste samples and the other of aqueous waste samples, arrived at the Laboratory. It ran for 15 days, ending on Nov. 4. With its "A" grade in last fall's proficiency test, the Livermore team has now earned four straight "A" grades. "Our team definitely feels a sense of satisfaction and accomplishment when we find we have correctly identified the spiked chemicals, finished our work, and can continue as a designated OPCW laboratory," Alcaraz says. When the LLNL chemists analyzed one of the organic waste samples, they detected the presence of sulfur in the compounds and suspected that they were sulfur mustard decomposition products.

"The challenging aspect of this sample was that some of the reportable spiked chemicals were not found in conventional databases. It required us to utilize all of our analytical instruments and strong interpretive skills to identify those compounds," Alcaraz says.

In the end, the team was able to piece together the data collected by multiple analytical techniques, dig through literature references, synthesize a standard reference material and prove that the detected compound was, indeed, a degradation product of sulfur mustard.

LLNL received its original OPCW certification in 2003. Its work is carried out by the Laboratory's Forensic Science Center as a part of the Global Security Principal Directorate's Nonproliferation Program. The other U.S.-designated laboratory is the Aberdeen Proving Ground, Md.-based Edgewood Chemical Biological Center. 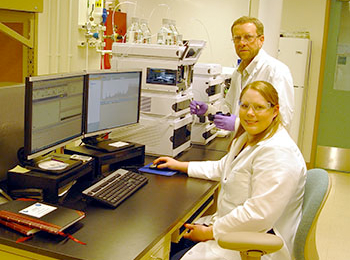 LLNL analytical chemists Ruth Udey and Deon Anex are shown next to the new liquid chromatography quadrupole high resolution time-of-flight mass spectrometer instrument that was used in the proficiency test for the Organization for the Prohibition of Chemical Weapons.

The OPCW administers the Chemical Weapons Convention treaty, which has been in force since 1997 and has been ratified by 190 nations, including the United States.

Under the CWC treaty, the development, production, acquisition, stockpiling and use of chemical weapons is banned, as is the transfer of chemical-weapon-related technologies.

Under a condition set by the U.S. Senate during its ratification of the CWC, all samples taken by OPCW inspectors at U.S. chemical plants must be analyzed in the United States.

The Laboratory's OPCW work is funded by the National Nuclear Security Administration's Nonproliferation and International Security Office and its Office of Dismantlement and Transparency.

The samples for last October's proficiency test, taken by LLNL and 21 other laboratories around the world, were prepared by the Agency for Defence Development's Chemical Analysis Laboratory in the Republic of Korea. The participating laboratories' test results were then evaluated by the Defence Science and Technology Laboratory from the United Kingdom.

In the most recent round of testing, nine laboratories received "A" grades, four received "B's", five received "C's", one received a "D" and three received "F's."